Traveling is never dull with the Spauldings

This last Christmas our family got a really awesome gift of plane tickets to Florida from my inlaws. My husband’s parents and little sister live on the gulf and everyone counted down until February when we were to use those tickets! The day we left was so full of anticipation and craziness. I’m taking some time to stop and write it all down 1. Before I forget it (yes I have terrible mommy brain and must journal anything I don’t want to forget) 2. So I can “look back and laugh” maybe not today but later…

My kids woke up super early so excited you would think they ate sugar all night long. They knew this was “the day,” the day we fly to Florida. We have been studying the ocean and beach for weeks in preparation. Since none of them have been to the beach except my oldest, one time at 3 months old. Which doesn’t count right? Nah. Maybe excited is too mild a descriptor. So much squealing and how much longer, I have had my fill of both for at least a year. Thankfully we had packed almost everything the night before and just needed to finish up the last minute stuff. **Side note, I felt like wonder woman packing a family of five for a week in Florida in just two suitcases! They charge $80 a suitcase round trip 😦 so I had to get creative. Oh and ask my mother in law to use her washing machine :)** Like weighing luggage, backpacks full of snacks and kid activities, cleaning the house, etc. I like to clean before we go on trips, because who really likes coming home to lots of chores?
Well our flight wasn’t until late and so the waiting was driving the kids (and if I am being honest, me too) crazy. We did have a three hour drive to the airport two states away. Which of course took about three and a half hours with a 2,4 and 5 year old. Potty stops, drink stops, Walmart for something we forgot stop, and a few picture stops because we saw some beautiful icy landscapes. I’m an artist as I’ve mentioned and love the beauty winter brings with the snow and ice. 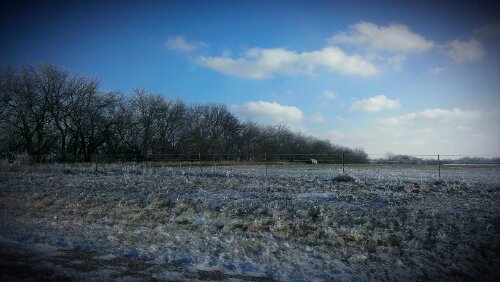 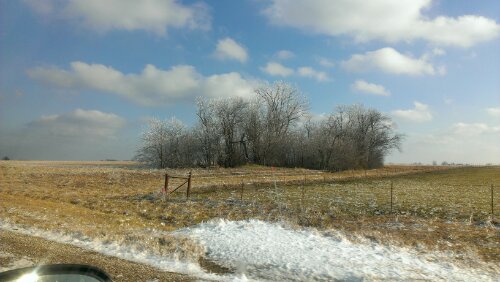 When we finally get to the airport, we are rushing because of the whole running a half an hour later than we wanted. Which was still super early, but my husband is one of those “early is on time and on time is late” people. So we rushed inside as best we can “rush” with three kids, a double stroller, three carseats, three backpacks, two suitcases as close to forty pounds as I could get them, and a partridge in a pear tree… Ok so I added that last one ;). We get to the ticket counter, just to check our bags. Eric had checked us in the night before, paid our luggage and chosen our seats. Early guy remember? Love that man! The nice lady at the counter informs us our flight is 40 minutes delayed. Thank you God, because I literally watched tension drop from my husband 🙂 we were not only “on time” according to Eric. We were actually ten minutes early! Yay!
So the airport is a smaller one. It was super clean and newer looking in its design/decor. It was not crowded (I’m not a huge fan of big crowds). It was easy to navigate. I have never had this pleasant of a reaction to an airport. Ever.

My oldest is a worrier, so one way we help her deal with new situations when we can is to prepare her for all of the things she will encounter. As best we can, we verbally walk her through the process in advance and it seems to make things easier on her. Well my husband the day before traveling walked her through the security process knowing she would be nervous. Well when she asked about why we had to put our things through the machine he explained they were looking for weapons like knives… When we got to security, she remembered this conversation and very nervously and loudly could not stop talking about knives! Um, I was already stressed getting three shoeless kids and a stroller through security. Now I was begging Katie to stop talking about knives or they would think we had one when we DIDN’T! Thankfully as I mentioned earlier it was not crowded and we were blessed enough to have super nice security workers. They smiled and were actually friendly and helpful! Not traits I thought were allowed of security employees from my past flying experiences. I cannot express how grateful I am for that smooth and easy experience even though my oldest was practically yelling about knives and why they are weapons. Sigh.

Then we went to our gate and got a bite of dinner since we had a good two hour wait. This was, interesting. Yep feeding three kids in an airport turns out not to be my favorite thing. Maybe when they are older and realize asking strangers for their extra pickles is socially awkward for their parents and the strangers who have already taken a bite from said pickle. Then we went to wait at our gate which all the seats were full since we had gone to eat. Noah went with daddy to watch the planes and the girls stayed with me and sang songs asking how much longer till we got on the plane only about 50 times. Oh, and when doing our history songs Bella got strange looks when singing about the Aztecs using pyramids in rituals of human sacrifice at the top of her lungs. Yep, my four year old loves CC history sentence songs.

Getting on the plane we did pretty well. I mean we had to walk to the 28th row, but other than that it went fine. I sat with my girls and Eric had Noah in front of us. Noah was in airplane heaven. He was jabbering about the wing and cool seats until we started moving. Then it was mouth hanging open in so much happiness he couldn’t even speak. Bella and Katie squirmed and giggled as we taxied. 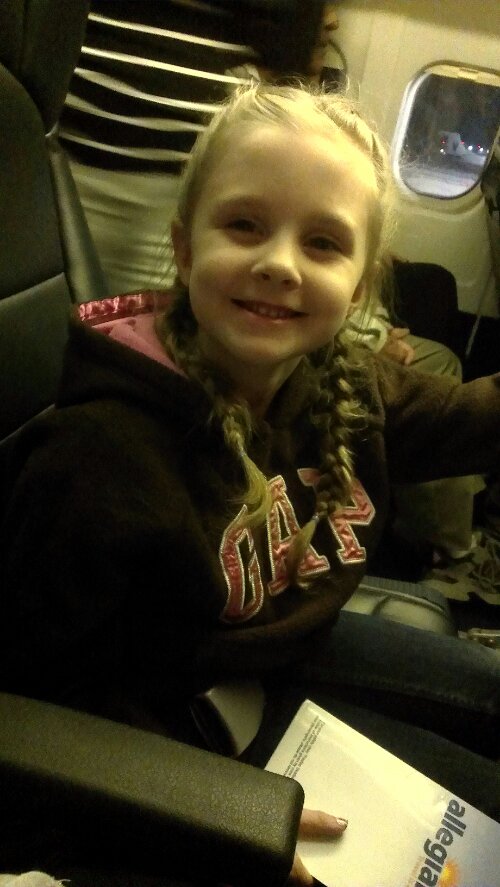 Then we feel the plane begin to take off. My son takes this as his cue to scream at the top of his lungs, “BLAST OFF!” Luckily we were surrounded by people who just laughed and were a good sport about a two year old’s first flight excitement. Then Bella next to me started nervous giggling really loud. Katie and Bella had their arms straight over their heads like on a roller coaster downhill. My girls enjoyed their backpacks full of snacks and activities. Until we hit turbulence and then both girls layer their heads on my lap and slept the entire last hour of the flight. Who knew turbulence and violent shaking would put my kids to sleep? Strange. Noah has ear problems and the pressure was too much for him so no sleeping on his part. He was good for Eric though and he enjoyed it with our little boy joy. He is still talking about the “super fast plane” days later!

When we landed I had some weepy girls because I had to wake them to get off the plane. As soon as they saw Grammie they were happy again though. We got into his parents house at about 2 am and to bed around 2:30 am. Talk about long day! Lots of new experiences and fun but we were tired. Well hope you enjoyed my post on our trip, we are now thoroughly enjoying Florida. Thanks for stopping by 🙂
Johanna

I'm a homeschool mother of two adorable girls only 11 months apart, and a sweet little boy. I love with being their mommy. My husband is a camp manager. I am passionate about being a stay-at-home mother and homemaker, its such an exciting, exhausting and rewarding job!
View all posts by crazyblessedlife »
« Extra Heavy Cream
Footprints for Grandma’s Garden »

One thought on “Traveling is never dull with the Spauldings”