My husband has been asking me for months to make a Cherpumple for the youth group Chili Cookoff and Baked Goods Auction at church.  I said, “No way!”  many many times, but I just love him so darn much… So yesterday I attempted baking my very first Cherpumple.  First of all, you may be asking what is a Cherpumple?  Well from my research, it was invented by a man named Charles Phoenix for Thanksgiving.  As a solution to the problem of different people wanting many different types of desserts. So he created a cake with three layers of different flavors with three different flavor pies baked into each, then stacked and iced with cream cheese frosting.  Strange, yes.  Funny, yes.  Gross, maybe.  Genius, since so many are making it… probably.

I spent a good 6 hours or so making this, so before you take this on know that it will take a very long time.  Next important fact is that it is best made with store bought pies and boxed cake mixes.  They withstand the process much better than homemade.  So we bought a cherry, pumpkin, and apple pie from the local grocery store and choose 3 that seemed the sturdiest.  Then bought a chocolate, yellow, and spice boxed cake mix.  Also 3 cans of cream cheese icing.

One tip I came up with on my own after seeing many others failures and complaints online is that I lessened the liquids.  I lessened the water and oil by about 1/8 of a cup each, and kept the eggs the same as the box called for.  I did this because I saw many cakes fell apart due to being too moist and soft. So by reducing the liquids I came up with a more dense and firm cake to uphold the pies inside.

So I began with my first layer of chocolate cake and a cherry pie inside.  For each layer I sprayed my 10″ round cake pan with cooking spray and placed a piece of parchment paper that I traced and cut out into the bottom and then sprayed that with cooking spray also. 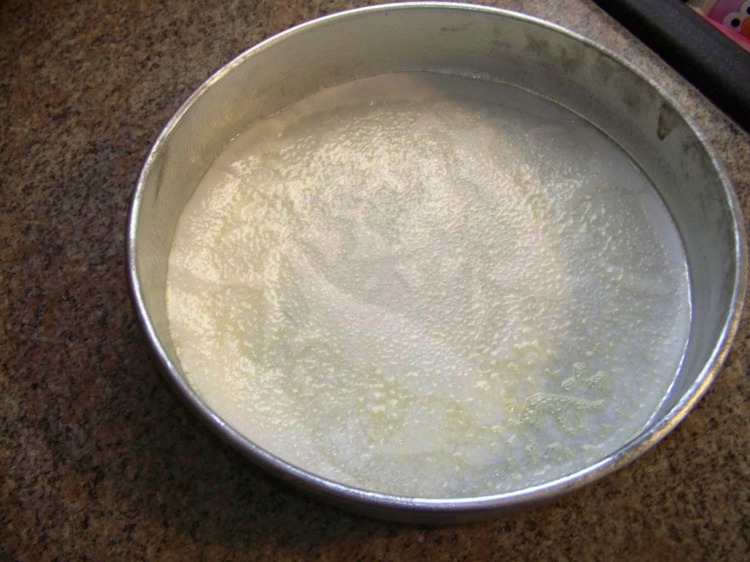 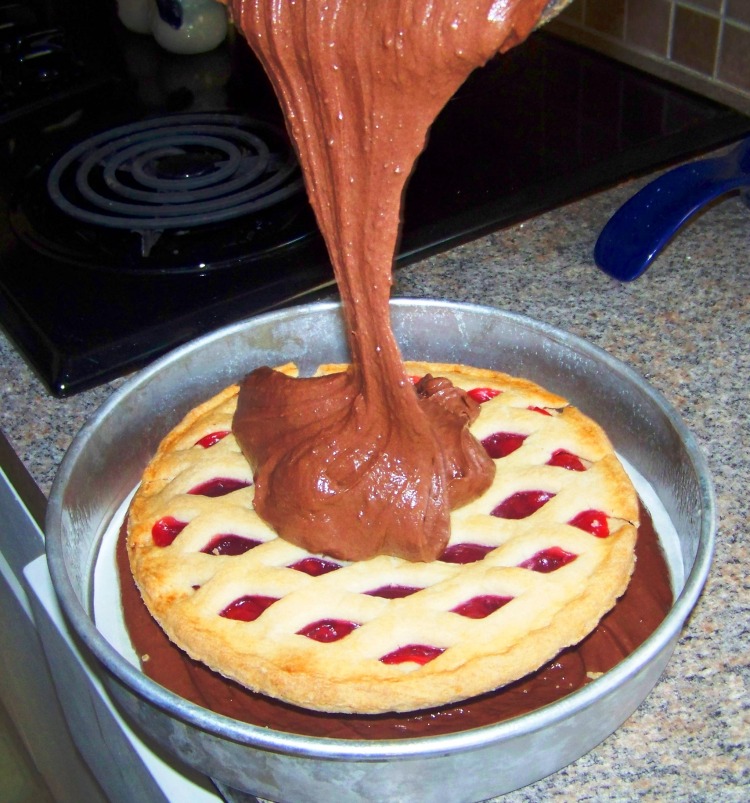 Then baked that at 350 degrees for about an hour, I just kept checking with a toothpick until it came out clean.  When I removed it I let it cool for about 5 min and then flipped out of the pan onto a cooling rack to cool down.  After about 25 minutes I put it in the deep freezer to quick cool for about 30 minutes before crumb coating it with the cream cheese icing.

I repeated this process with the apple pie in the yellow cake, and the pumpkin pie in the spice cake.  I froze each layer, the freezer was my friend when it came to keeping my cake stable.

pumpkin pie in the spice cake

After the final layer of icing I decorated and let freeze a bit longer.  We had to take it to church without my cake carrier because it just wouldn’t fit.

finished Cherpumple before I took it to church

This is a picture of what it looked like when it was cut into.

I wont say it was a big hit because it wasn’t, it didn’t go for very much.  Only had one bidder (a man who loves me like a granddaughter) and even he split it up and passed it out so he didn’t have to take it all home.  I only had one single comment about it and that was from the winner, “you’re trying to kill me” (said with love of course). Not the hit my sweet hubby had hoped it would be for sure. Or the conversation piece others I read online found it to be. So while it was a fun challenge to make and its nice to say I’ve done it, I guess it wasn’t that great and I probably wont do it again.

I'm a homeschool mother of two adorable girls only 11 months apart, and a sweet little boy. I love with being their mommy. My husband is a camp manager. I am passionate about being a stay-at-home mother and homemaker, its such an exciting, exhausting and rewarding job!
View all posts by crazyblessedlife »
« Christmas Pictures
15 Traditions of Christmas »